On Sun Feb 22 1400 GMT LEARNING2GETHER met CALL-IS TESOL to find out all about Bb Collaborate Elluminate in a hands-on live online sandbox, hosted by Jack Watson, organizing the webcasts at the TESOL conference in March in Toronto, http://callis2015.pbworks.com; and Vance Stevens explaining what he knows about Bb Collaborate / Elluminate.

This was an introduction and refresher to Blackboard Collaborate, formerly known as Elluminate. It’s been set up as a sandbox practice session for CALL-IS volunteers who will be simulcasting sessions using BbC from the TESOL conference  March 26-28 in Toronto. In this practice we’ll make anyone who wants to be one a moderator. Moderators can see the complete tool set for BbC, and we’ll explain, demonstrate, and practice with the tools that moderators will likely use in Toronto.

BbC runs from servers at institutions where someone has bought a license and then allows authorized users to host webcasts from that server. LearningTimes at http://learningtimes.com pay for one such license and have been renewing their grant to the Webheads in Action community of practice for use of a Webheads Virtual Office each year for over a decade now.  Jack Watson’s institution also owns such a license and Jack is authorized to use a UBC room from Toronto as well. It’s worth noting that different versions of BbC might have slightly different interfaces, but the basic functionality will be the same.

The session today will be held in the Webheads Virtual Office. To connect, visit the link below

If you have trouble connecting, or need help outside Bb Collaborate, try this back channel

Bb Collaborate recently went over to a start file with a different extension (.collab) than the one before (.jnlp). If you haven’t used BbC in a while you must run the Tech Check which will place the correct installation on your computer. Failure to do this could delay your entry to a session if you don’t allow sufficient time in advance.  On a PC, the Tech Check works like magic. I’ll try and check it on Mac and iPad before the session, but we may simply get feedback from others who join us from those devices.

To do a Tech Check simply

Finally, be sure and have everyone run the Audio Wizard

This image is free to use or share (public domain actually, no attribution required) but for the record, it’s from http://pixabay.com/en/sandbox-toys-beach-play-bucket-295256/

What happened, where is the recording?

During the session we made everyone a moderator and invited them to break the tool if they could. I’m afraid someone did. At the end of the session, no recording came down as it normally would. I have written LearningTimes about it but have not received a reply, which probably means as far as they are concerned everything is working fine and there should have been no problem. In fact I just made a recording there to test that things are working and it came back to us fine.

We had multiple moderators. Some odd things were happening. Breakout sessions were opened and possibly not closed properly, though they should have closed automatically. The recording stopped during the session but we resumed it. It could have been that someone did something else inadvertently that caused the problem. I did everything I usually do, made sure the room was empty, stopped the recording, ended the session with an empty room. The fact that we lost our recording is without explanation at this point.

Meanwhile Robert Wachman has offered what he thinks is a good tutorial on Bb Collaborate http://youtu.be/fXcXDGEeNsg

Where? Bb Collaborate (Elluminate) http://learningtimesevents.org/webheads/ thanks to an ongoing grant from http://www.learningtimes.com/

and thanks to Jeff Lebow, simulcast on http://webheadsinaction.org/live

What?  Electronic Village Online has just completed its 15th year of free weeks-long (currently 5 weeks long) sessions of quality professional development sponsored by TESOL, http://evosessions.pbworks.com. This is an event where all EVO2015 participants are invited to gather at the end of this year’s #evosessions to reflect on their EVO experience. 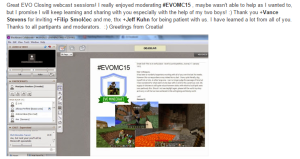 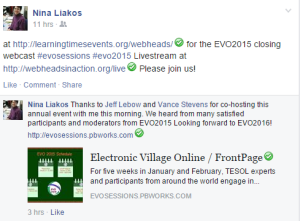 With the termination of this broadcast, the Jan 12 – Feb 15
14th annual Electronic Village Online sessions have now ended

Find archives or join the next one at http://evosessions.pbworks.com

IATEFL YLTSIG has rescheduled the class on ‘YLT SIG Webinar: Learn it through an action song!’ to Feb_09 2015, 09:00 PM ((GMT+04:00) Abu Dhabi, Muscat). You may use the same class link to enter the classroom at its changed date and time.

Message From The Presenter:
We moved the class to Monday instead of Tuesday at the same time 5PM GMT (12PM EST). We hope this will not inconvenience you. Thank you.
Enter the Class

This is an EVO Minecraft event about setting up a server using a Skype call; it will be practical practice and not recorded

Use this space to leave messages related to this event

If wishing to join at VANCESTEV to your Skype contacts

An excellent resource is  Joel Mills’s YouTube channel on servers, from the Canvas MC MOOC. The first one is pretty informative about basic server terminology and implications of types of servers, server side mods, and so on – find more on this channel: http://youtu.be/T-jTfkF3i7g

Joel Mills is holding open tutorials on Friday 13th February at 9.00 – 10.00 am GMT for anyone who wants to get some advice or support on any of their Minecraft projects. He will be using the Canvas conference tool again, but in a way that allows people to join in and ask their questions or get support.

Look out for the conference email on Friday morning and follow the link to join in.

For our participants from further afield we will hold a conference onMonday 23rd February at 5pm GMT so we can make sure they can join in live as well.

On Sun Feb 8 1400 GMT LEARNING2GETHER held its 2nd part of a doubleheader presentation series with Vance Stevens presenting to participants of the EVO session ICT4ELT a digital story about Webheads in Action, entitled “Once upon a Webhead … ”

This was quite an interesting session and it should have been recorded.  It was largely about servers but also about Joel Mill’s Minecraft projects. Among the things that Joel showed us:

The recording link is here. I’m not sure if you have to be enrolled in the course to view it

Here is the calendar

On Sunday Feb 8 1300 GMT Jeff Kuhn and Vance Stevens presented EVO Minecraft MOOC at the free live Connecting Online CO15 Conference being held Friday, Saturday, and Sunday of that weekend. This was the first of a LEARNING2GETHER DOUBLEHEADER where Vance presented at consecutive CO15 and EVO Week 4 events

Once upon a time you could just sign up to present here
https://docs.google.com/document/d/1s9TK1r3vpquIO0gBqmnZH3LgoN2Jf-DY4cbQT0-zNVs/edit

Here is the calendar
https://www.wiziq.com/tutorial/899705-co15-calendar-of-events

Here’s a list of webinars (with their links but without timings)
https://docs.google.com/document/d/10HzSb_QYbbb6kQoVAXqG9FyLJSX5GYQ1ZiG1hpXP1MI/edit

Here are the recording links

Go to https://www.wiziq.com/tutorial/899705-co15-calendar-of-events and click on a session to get its WizIQ URL

Here are the links from Nellie’s announcement on the second day of CO15 as we partner for learning:

2. Organizational aspects in e-learning: the issue of knowledge management: http://www.wiziq.com/online-class/2476713-co15-organizational-aspects-of-e-learning

4. Books on E-learning: Technology That Tutors:http://www.wiziq.com/online-class/2476735-co15-books-on-elearning-technology-that-tutors

6. Using Student Feedback for Continual Improvement of Your Online Course:http://www.wiziq.com/online-class/2476753-co15-student-feedback-for-continual-improvement-of-online-courses

8. The End of Online Learning – the Beginning of Mobile Acquiring Language Skills:http://www.wiziq.com/online-class/2480120-co15-end-of-e-learning-and-into-mobile-acquisition-of-language-skills

10. Setting Up and Running a MOOC on WizIQ: Lessons Learned and in Progress: http://www.wiziq.com/online-class/2476812-co15-setting-up-and-running-a-mooc-on-wiziq

11. Dealing with difficult students in the online classroom: http://www.wiziq.com/online-class/2476836-co15-dealing-with-difficult-students-in-the-online-classroom

Go to https://www.wiziq.com/tutorial/899705-co15-calendar-of-events and click on a session to get its WizIQ URL

On Sun Feb 1 at 1400 GMT Learning2gether hosted an EVO Minecraft MOOC Hangout on Modifying the game for language learning. With us we had EVOMC15 co-moderators David Dodgson, Jeff Kuhn, and Vance Stevens

Dave Dodgson  planned to outline what his students at his former school were doing with Minecraft and what he’s been doing at his current school. He has two videos his former students made on Youtube which he has shared.

Now that the EVOMC15 particpants have tested the Minecraft waters Jeff wanted to talk about  modifications for the game (nothing too technical) so folks can get a glimpse into how Minecraft can really be tweaked for specific learning content.

It was interesting to hear Jeff’s and David’s perspectives on using Minecraft with students and on the benefits of gaming and advantages of Minecraft in supporting those benefits. It was especially interesting to hear how easily one could set up a Minecraft server for classroom use (David was running one on the teacher computer in his classroom, and Jeff thought I could run one from my laptop.

Meanwhile the agenda on Canvas Minecraft MOOC for this week is servers. You can join that MOOC here
https://www.canvas.net/courses/minecraft-for-educators

“Week 2 is all about servers; what they are, how to download them, install them and some things to watch out for along the way.” Here is the schedule:

Technical footnote: There were connectivity problems with HoA in UAE. Dave was having them in Gabon. He dropped out of the call at least once. In Dubai, Tomas Lorincz struggled to get in and never quite stuck (he ended up listening to the stream). I got my first disconnects in Al Ain when I was setting up for the event. This prompted me to log onto another computer, which also started disconnecting, but at least I had two in the fray. I restarted both and got one to connect, and the other appeared to connect but did not show up on the first computer. Once we were under way the first HoA froze in my browser. I could hear and people told me they could hear and see me, but that browser had no functionality (for me to mute for example). The second computer kept dropping out, I kept refreshing it, but it never joined the HoA, except that when it came time to close the recording and there was no functionality on my frozen computer, the stop recording button worked on the one that wouldn’t actually let me in the HoA.

I think things went well as far as the other participants were concerned, Tilly and Sara joined us in the HoA, and Maha and Gil Mattos were present in the stream and said all was fine, and I think the recording is ok. But it was very strange and challenging to keep things going from where I was pushing plans B and C.

Thanks to an ongoing grant from http://www.learningtimes.com/

The EVOlution of Jan

This is a Google doc  https://docs.google.com/document/d/1RBQCrtRs48d9luMrnYzzxhnrPBVnaNI-v2YDcnPVXFg/edit?usp=sharing that was created to share the different resources shared during the hangout, things the participants asked about and resources that +Maha Bali and Maha Abdelmoneim found and thought would be useful. Please feel free to add or correct etc 🙂

Earthbridges.net brought Col. Joe Kittinger into classrooms around the USA, perhaps around the globe, on Thursday, January 29, 2015. He was the first person to jump from the stratosphere back in 1960! Join us when we interview him about his jump and other accomplishments during his life!