Skip down to Earlier Events

I was supposed to attend the CALL Research Conference in Hong Kong in person, was on track to go there and very much looking forward to it, when something unavoidable came up and I had to cancel my trip. When I contacted Jozef Colpaert, the guiding spirit at the CALL Journal and annual research conference to tell him I would have to miss an editorial board meeting on the first day, followed by my own presentation, plus taking my seat on a reviewer’s panel on the final day of the conference, he took a couple of days to respond.

When he finally replied, he pointed out that there was one other event I had failed to consider, and that was my appearance at the closing ceremony where, I wasn’t supposed to know this, but a jury had selected me to be the recipient of the CALL Research Conference Lifetime Achievement Award for 2019. Another complication was that rules stipulate that the recipient must be present at the conference BUT as I had paid my registration fees, had been fully intending to come, and was legitimately prevented from traveling, and after all, this WAS a conference whose theme was Social CALL, perhaps I could receive the award via Skype.

The video shows what happened next. Jozef convened the closing assembly and handed off to my good friend and colleague, and 2018 Lifetime Achievement Award winner Phil Hubbard, who gave what he said was the talk he would have given the previous year had he not been taken so by surprise at the time. After his remarks, he set about introducing me, and mentioned three of my websites in particular. I mentioned these in the post I made on Facebook after I had made a recording of the ceremony and posted it there. 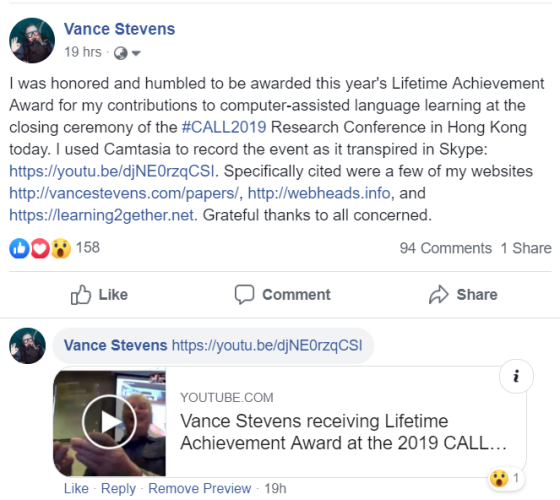 This says: “I was honored and humbled to be awarded this year’s Lifetime Achievement Award for my contributions to computer-assisted language learning at the closing ceremony of the #CALL2019 Research Conference in Hong Kong today. I used Camtasia to record the event as it transpired in Skype: https://youtu.be/djNE0rzqCSI.”

Specifically cited were three of my websites

I said in my post that I was grateful to all concerned (I meant when I posted that, my colleagues at the conference) but now, a day later, also to all those who responded to my post. So far, in just one day, there are over 150 likes and almost 100 comments (at last count, up to 215 likes and 128 comments). The outpouring is heartwarming. But as I said in one of my replies to my own post, this award is for a collective endeavor:

Thanks everyone, I am a part of many deeply and broadly populated communities of practice that have made my work possible. I simply represent the people who have responded here. The award is deserved by all in these communities

Meanwhile Jozef had been kind enough to allow me to deliver from a distance my paper that had been accepted at the conference, “Thinking SMALL about social media assisted language learning,” in Zoom during its normal presentation slot two days earlier. As usual I had put online my prose preparation for the talk, the slides I created from those notes with all the URLs I referred to hyperlinked, plus recordings of me giving the presentation in both video and audio format, and called it Learning2gether episode #415:
https://learning2gether.net/2019/07/10/thinking-small-about-social-media-assisted-language-learning-vance-stevens-presenting-at-the-2019-call-research-conference-hong-kong/

I was going to append my award video to the bottom of that post but I decided instead to make it into a separate Learning2gether episode. After all, it’s not often one gets the chance to indulge oneself like that, at least not in my life.

As Phil mentioned in his introduction, his being awarded the same honor last year doesn’t mean that it’s all the icing on the cake of life served each person at birth. It’s just the start of what we have left to deliver in our time remaining in which to continue the story with more if not better accomplishments. 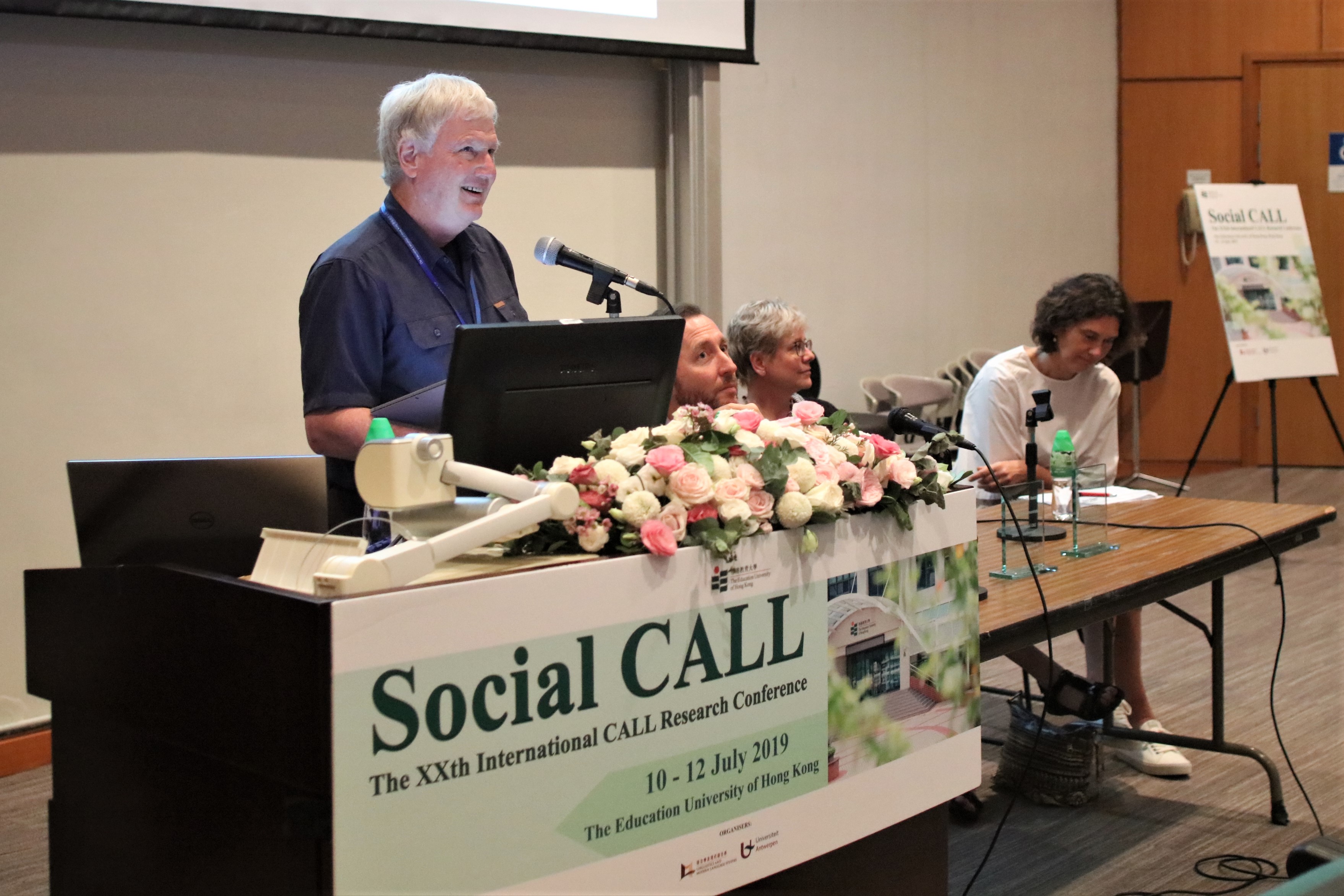 Here, the award is being made, the audience claps 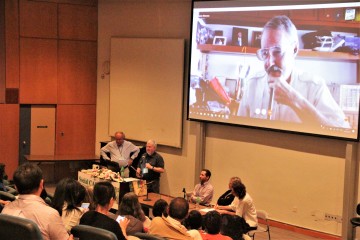 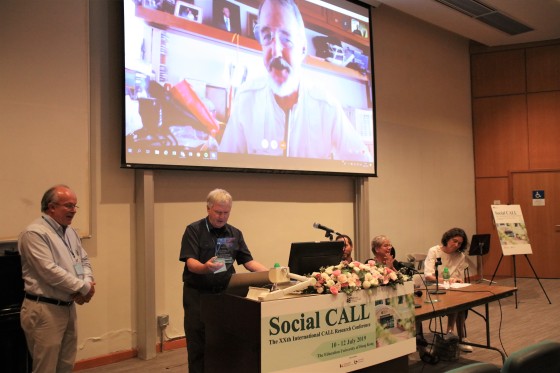 And here, the audience poses at the conclusion of the closing ceremony

Here is the paper version of the award