Vance Stevens hosted a live online session ostensibly to explain in greater detail how to get started with Google Reader, as described in this blog post:

You could use this technique to follow student blogs or blogs from any group or individual you wish to follow.  I had offered to help participants set up their Google Readers hands-on to find all the posts in blogs that have been written to reflect on certain EVO sessions.  But the participant mix took the conversation into other directions.

We encountered a problem through choice of Sync.in.  After 8 participants had joined the chat it would allow no more (and we were relying on that chat to disseminate the Hangout link on the fly).  We didn’t realize until 15 min. into the program that people could hear the stream but couldn’t communicate with us or figure out how to join the hangout, but eventually stragglers made it in and informed us, so tweeted the Hangout link and put it up at http://learning2gether.pbworks.com and created the second TitanPad text chat below.

Significance of the event

There is another very interesting aspect of the session this Sunday.  It was the first time I conducted such an event in a Hangout On Air, and streamed the video at http://webheadsinaction.org/live

The procedure is explained in the video show below, direct link to the video: http://webheadsinaction.org/painless-magic-vance-learning-jeff-lebow

This procedure overcomes two limitations of hangouts. One limitation is that you can only have 10 in a Hangout at a time.  The other is that it’s hard to tell people where you’ll be hanging out because hangouts are designed to be found through your circles and other social features of Google + so there is no URL to give out until the Hangout actually starts.  Thus, many Hangouts are announced, but participants can’t enter because there are ten there already, and the participants are left standing outside a locked door, which is not colleaguial.

http://webheadsinaction.org/live overcomes both these problems.  First, I can embed an Etherpad clone chat there where anyone can interact.  I can put the hangout URL there and others can click on it and join the chat, or if you are having problems you can get help in the chat (in practice we ran up against the 8 participant limit in Sync.in, which we will avoid for this purpose in future).  Secondly, since the YouTube embed that lets you play the recording later HAPPENS to stream the event while it’s in session, then anyone can visit the URL where that link is embedded and listen to the stream.  So if the Hangout is full, hundreds more can listen in and interact in the Titanpad chat (thousands? tens? no idea actually). We can also announce on the stream when places become available in the Hangout and participants in the Hangout can be rotated in and out that way.

So one purpose of the session will be to Learn2gether about Google Reader how to follow class sets of blogs. But in so doing we’ll see how to stream a Hangout so it can reach beyond just the ten in the hangout itself.

Testing prior to the actual event

I tested this at around 1300 GMT with Kalyan Chattopadhyay.

It worked fine as you can see from this recording

Learning how to do this

This is the video in which Jeff Lebow coached me on learning this technique.  It can be found also here: http://webheadsinaction.org/painless-magic-vance-learning-jeff-lebow

Holly Dilatush graciously agreed to share her comments here which she posted to Google + as we were meeting together.  It seems she was having F.U.N.

I just heard Jeff’s Sae-hey-bok-mahn-ee-pah-deu-sey-yo! (or something close!) i will never forget that expression = Happy New Year in Korean!  Happy New Year, all!

So much fun to see you all!

[EVO_Drama_2013 is rather quiet, too, though it’s picking up a lot today for some reason]

I haven’t signed up for kubbu = too many things to keep track of and testing my ability to say “No.” (or at least, “Not now”).  Every new post about it tempts me to go sign up and play, too.  But as of today I have not signed up.

Interesting observation…. watching the hangout recording = we don’t see who is talking…

psychedelic flashes!  (Why?) Are there really colors flashing in her room? (not sure who that is).

How quickly we feel frustrated!  So many options!  Isn’t it amazing that we are navigating all of these (or at least some of these) =  I used to give up but now keep trying most of the time = often without thinking twice.

Podcasting = I do need to revisit this… was frustrated with this in the past.  Isn’t it interesting what we choose to follow, why, and when/why we give up?

Stael (sp) = how to pronounce

On WizIQ, it’s advised to close Skype and any other programs that use microphone… if you are the one who started the class… so I wonder if this is what caused Vance’s disconnects?  [But I do NOT know what I’m  talking about, do not understand the behind-the-scenes tech stuff! …just passing along a possible tip?]

Trace Effects game = another I’ve passed on for now…  How do we keep up with all the things we attempt to keep up on.

OK… sorry guys, have to stop listening… but these hangouts on Air recordings make me feel less left out (won’t make TESOL this year; didn’t make TESOL last year, and miss seeing everyone in person; this is the next best thing!). 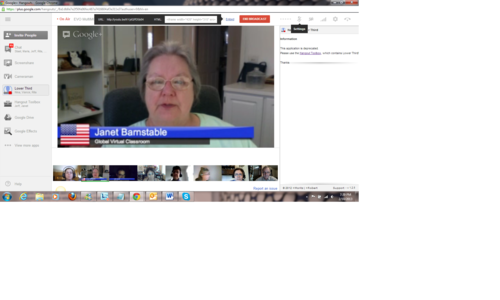 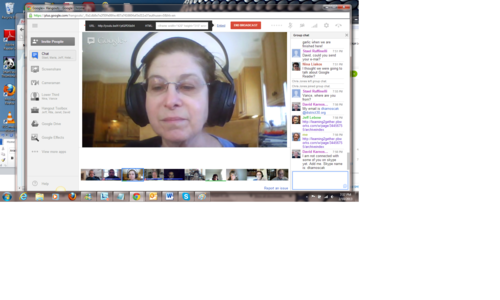 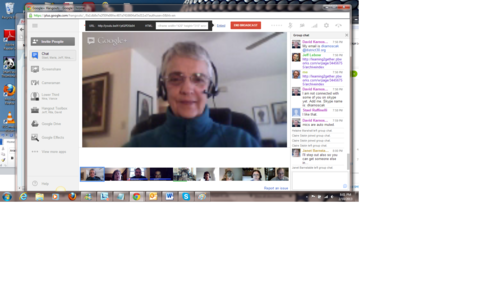