THIS IS A WORK IN PROGRESS, AWAITING OTHER COMPONENTS

An Inside Look into CALL Professional Development in Iran

This Wednesday (May 27) at noon GMT/UTC, we will be meeting up at my online PhD CALL class at Alzahra University in Tehran, so you can get an insider’s look at what CALL professional development looks like in the Iranian context.   The session will be held on Adobe Connect at the following location, and will be co-hosted by Laine Marshall and myself.  Shout out to Laine for co-hosting and to Vance for helping with the arrangements.  🙂

I look forward to welcoming you to Alzahra University in Iran!  🙂

Where? in Adobe Connect
Recording link and possibly mp4 forthcoming

But the event was also STREAMED

You can watch such streams here, https://www.youtube.com/c/VanceStevens/live
And you can find the links to this stream recording (2h 04min) at:

In preparation for this session, I needed to visit Susan’s Adobe Connect earlier in the day in order to get her Adobe Connect window open on my computer so that I could configure my OBS (Open Broadcasting Software) to record it in synch with my mic and the computer sound card audio, so as to have it all working properly when I would start the stream later that day. I serendipitously found Susan in Adobe Connect and in contact with her students who were at that time preparing for their upcoming event, and she granted me entry to the class she was teaching.

In these connections with only my video at a distance, and Susan’s and sometimes her students videos (they were preparing their sound and audio in order to be able to connect seamlessly with video and audio when we met later on) we experienced issues with noticable lag (e.g. in my asking if she could hear me and then getting her thumbs up many seconds later) and times when the audio would cut out entirely for many seconds at a time, and the video would freeze.

However, things were working well enough that I could take questions from the students. They asked about my problem solving process, and I told them that in order to make things work you have to try them out, encounter problems, analyze their cause, and figure out how to fix them. Failure, in this process, is a desireable outcome. If you don’t fail in your process of learning, then you’re doing something you already know how to do; you’re not learning how to do something you want to learn how to do.

One student asked me a very intriguing question, one that I was mulling over before getting out of bed this morning, and decided to make it my first order of business today to answer here in greater detail. When the students found out that I had started working with computers as a medium for language learning in 1979, over 40 years ago, one of them asked me what drew me to computers at that time.

They had all grown up taking  computers for granted as being ubiquitously present in their lives, but I obviously had not. Indeed the Apple II was first released in California in 1977, opening up for the first time the possibility of personal computing for everyone outside a small coterie of hobbyists of whom Jobs and Wozniak became, in that move, the most prominent.

I’ll save the details for later, but I told them I had been one of a small but growing coterie in TESOL who had seen computers as being what had been missing in our attempts to learn foreign languages, and also to teach them, both of which we had been doing as best we could, as creatively and energetically as possible, with the “traditional” resources available to us up to that point. One problem with traditional methods was that they were slow and painstaking in execution, involving redundant tasks that computers, with their inherent iterative processes, could help cut down on (can you imagine having students write out multiple drafts of compositions freehand, for example – of course students had more time for that, they weren’t checking Facebook or Whatsapp or Instagram every ten minutes).

There is no doubt that computers have made us more productive in shorter time, and expanded our horizons for creativity, for both teachers and students. I told them for insights into my thinking at that time, check out my early papers, which they could find in full text and online, at http://vancestevens.com/papers/.

So this morning I’ve curated four of those papers which make the points I could not really convey in the few moments I had available, at the time, to come up with a brief answer to a question that a student had asked in an online class that I had just interrupted.

Among the many papers I produced in the first ten years of my work with CALL, I think that these most concisely address the question, what caused me and many like-minded colleagues to feel so strongly that computers had such great potential for language learning and teaching, and the corollary to that question, why were so many of my colleagues at the time so resistant to using computers in those early days?

The first paper from 1984 was written in the year of the TESOL conference in Toronto where a symposium on CALL had been convened which led to its participants proposing the formation of a Computer-assisted Language Learning interest section in TESOL.  I was elected to be associate chair of the new CALL-IS, but it was not until the following year, in Houston, Texas, that we were able to usher our proposal through TESOL’s bureaucracy and get it accepted. By that time the person elected chair had dropped out, and I was appointed the first official chair of the now-official CALL-IS in TESOL.

The second paper was delivered at that conference and would have been meant not only as a position paper addressed to those who were trying to form the new CALL-IS, but also to help persuade those skeptical of our position to come over to our side.

The other two papers show where we had got to over the next five years in CALL-IS, the end of my first decade in using computers with language learners.

One challenge for CALL development in Iran, especially regarding connecting with colleagues at a distance, is lack of opportunities to try things out in live webinars such as the one Susan had proposed. Susan’s students clearly have a lot to offer and are doing an exceptional job in constrained circumstances. This was perhaps one of their first attempts at taking their class onto a world stage, and they were experimenting with as many tools as they had learned in their CALL courses. By way of analogy, they were throwing spaghetti on the wall to see what would stick, but that’s how you learn to make good spaghetti. Now that we know more about their issues we can hopefully work further with them to help them improve and overcome some of the technical issues you might notice in the video.

I’ve posted here the recording of the video I streamed using Open Broadcast Software (OBS). I believe the streamed recording would be succeptible to the same bandwidth degradations faced in the online event itself. However, the local Adobe Connect recording might have preserved more sound packets intact and might give a smoother experience. If Susan is able to provide us the link to it, then we can post it here, and check it and see.

I think Susan and her team from Iran were very brave in undertaking this challenge despite the possibility of participants having to sip from a glass only half full. The part that came through to us gave an interesting indication of what students and their professor have been able to accomplish despite so many limitations in their context.

More interactions like this will be the way forward for them, and I’m happy that they chose, Webheads, Learning2gether, and TALIN as a crucible in which to practice and perform their experiments.

Words of appreciation from Dr. Marandi

Thanks so much for your kind words, Vance, and for all the time you put in.  I truly appreciate it; you lost the better part of a day trying to figure out how to stream our session live; that amount of dedication is something everyone should learn from!  My students were certainly very impressed.  (Honestly, so was I.  🙂

Yes, I really think my students are doing a great job and have a lot to offer.  In fact, they had prepared so much more that we didn’t have time for, but they had a wonderful time, nonetheless, and were extremely excited.  I have no doubt that this day will remain in their memories as one of the highlights of their PhD and perhaps their education.

Thank you Laine, for suggesting it, Vance for guiding us through the whole thing, and Christine, Claire, Hala, Elizabeth, Teresa, Heike for participating.  (I hope I haven’t left anybody out.)  You were all very sweet and supportive, and helped my students feel special.

I’m not sure if we’ll have chat logs from this one, unless Susan is able to provide them. Meanwhile, here is a snippet: 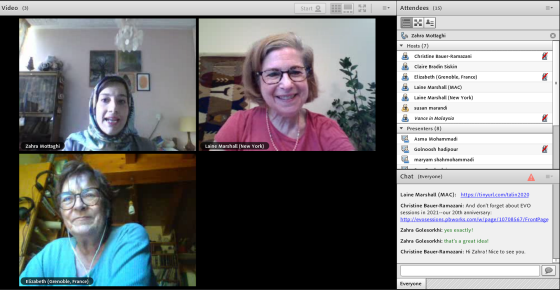 TALIN stands for Teaching and Learning in IsolatioN, https://tinyurl.com/talin2020

The idea for TALIN was prompted by suggestions in numerous cross-fertilizing communities of practice that there was needed a space where members of these CoPs could meet online and talk informally to one another about how they are dealing with changes in their personal and professional contexts and what they are doing to help others in this trying time of pandemic.

Learning2gether can host TALIN events in Zoom during times of isolation/lockdown if they are intended to be recorded and shared with the wider community, and if they take place between 02:00-14:00 UTC

TALIN events here are open to all and free to attend.

You can host the event yourself, but if you want Learning2gether to host it and promote it, please allow enough time to check that I am available, at least a few days in advance.

At the Virtual Round Table Conference May 8-9, 2020, Vance provided even more about TALIN here:
https://bit.ly/talin2020 and https://youtu.be/iOYPkmWPAiY